I admit that when Joel Coen first contacted me about this film, part of me was hoping for a chance to dive into Scottish music, which I love. But one of the first things he told me about the yet-to-be-shot film was that it did not really take pace in Scotland. And as soon as he sent me stills from the set I could see that this was the case. The film's location isn't so much a physical as a pscyhological place.

Since the production was interruped by the COVID-19 pandemic, I ended up with a lot of time to sit with the unfinished film and try out different approaches. 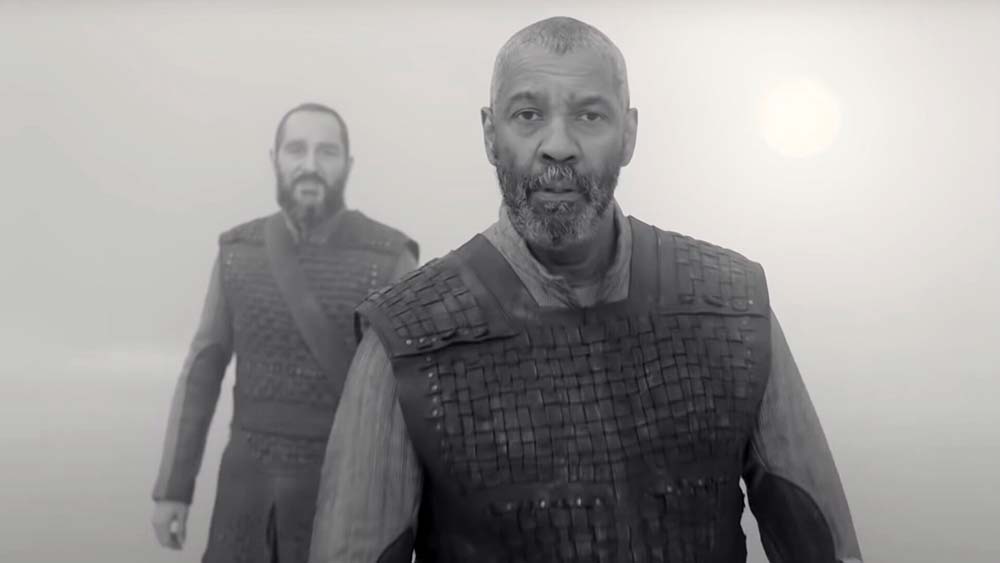 One thing that's novel about this rendering of the story is the age of the actors. Joel has called it the "geriatric" or "menopausal" Macbeth. This is funny but not irrelevant. One of the enduring mysteries of the play is Lady Macbeth's reference to having suckled children when the couple has none. Played by younger actors, one can imagine them trying to establish a royal seat for yet-to-be-born Macbeths. But as characters in their 60s their ambition is different, a last-chance effort to achieve what they can in the time they have left.

Another thing that struck me, when looking for thematic material, was the sincere affection between Lord and Lady Macbeth. I wanted music to play the marriage, the way they support one another (Joel and Fran call it the one good marriage in Shakespeare). But as I developed that theme it never seemed to stick to the film. There's a bit of it left in "Leave The Rest To Me", though.

In the end there were two main themes that survived the long, almost relaxed, post-production that went on whlie we waited for a time when COVID protocols would allow us to put enough people in a room to finish the film.

One is a chromatic movement between string chords, like waves slowly rolling in and out, with different colors rising and falling, out of which comes a strange fiddle part. I call it a fiddle rather than a solo violin because I wanted the rough-hewn, timeless quality of folk music without actually referencing any specific tradition. While I wrote a lot of slides and turns on the page, the real secret was finding the right player who could go "off the page." I found the perfect player in Tim Fain.

The other major theme has pace and drive and takes over as the English forces, disguised as Birnam Wood, march on Dunsinane Castle. This is a rhythmic, forceful march played primarily by strings, percussion and brass. Recording brass during a respiratory disease pandemic was not easy but with a large room, lots of air circulation, and daily testing, we got it done. 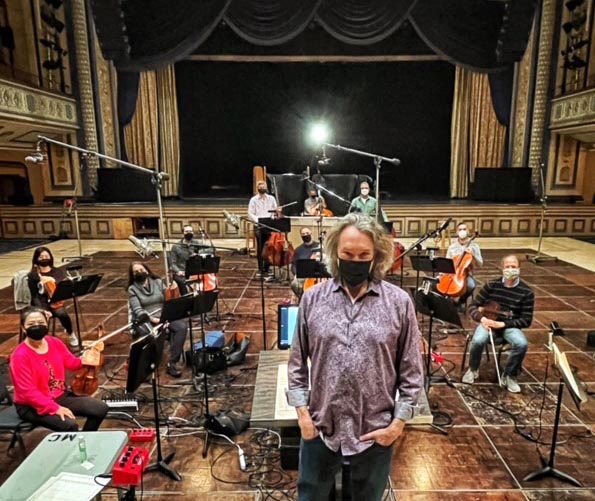 Carter and the band at Manhattan Center

Developing the concept for a film score typically involves both free association and real life constraints. Upon seeing the stunning black-gray-and-white photography I immediately imagined strings - probably the influence of Bernard Herrmann's score to Psycho. But strings also made practical sense during COVID as the players could wear masks, unlike woodwinds or brass or chorus. So, for various reasons, some creative, some practical, the score relies heavily on strings, particularly the celli and basses whose pitches don't fight the omnipresent dialogue, which Joel and I came to consider the "melody" of the film. 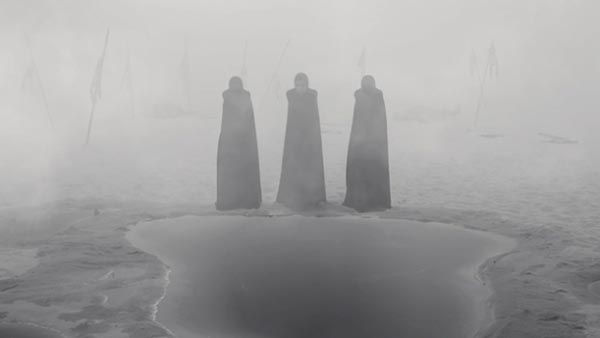 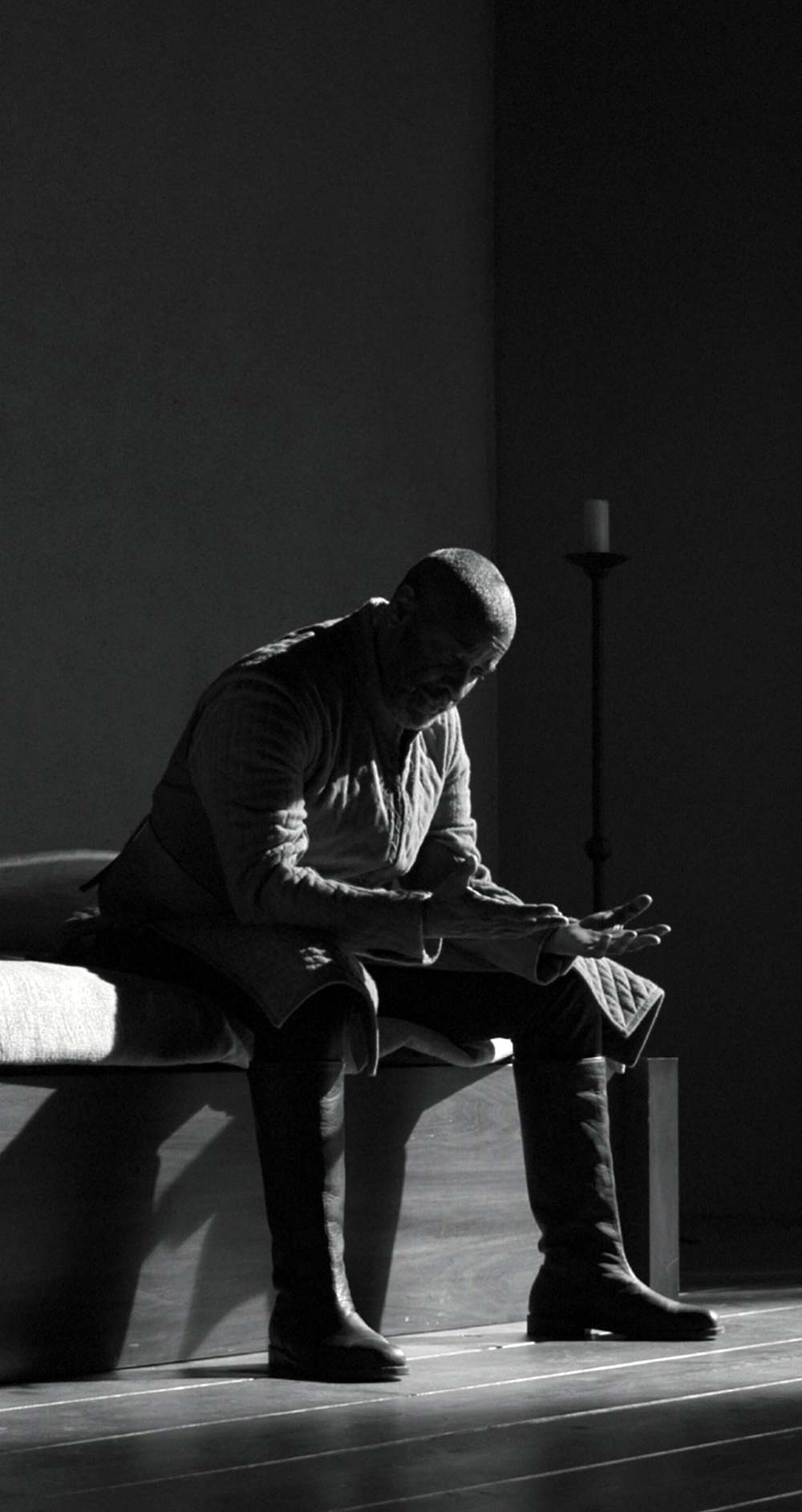 The score is availble from Milan Records on Apple Music, Amazon and other platforms. Here, for demo purposes, are some excerpts: 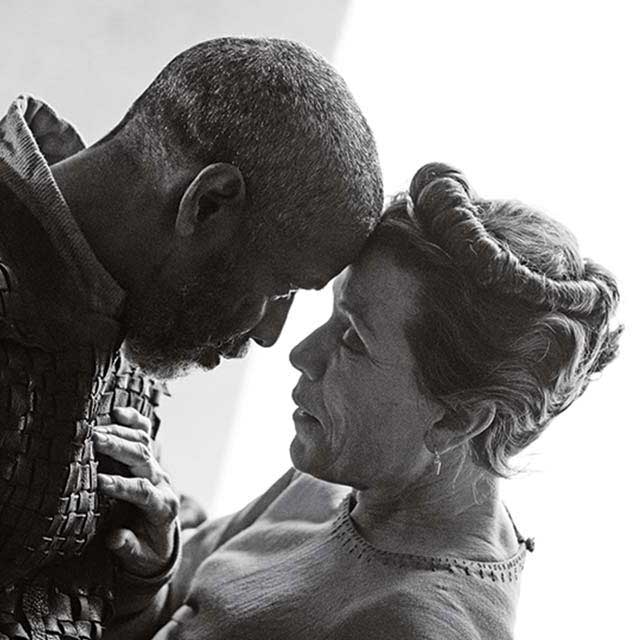 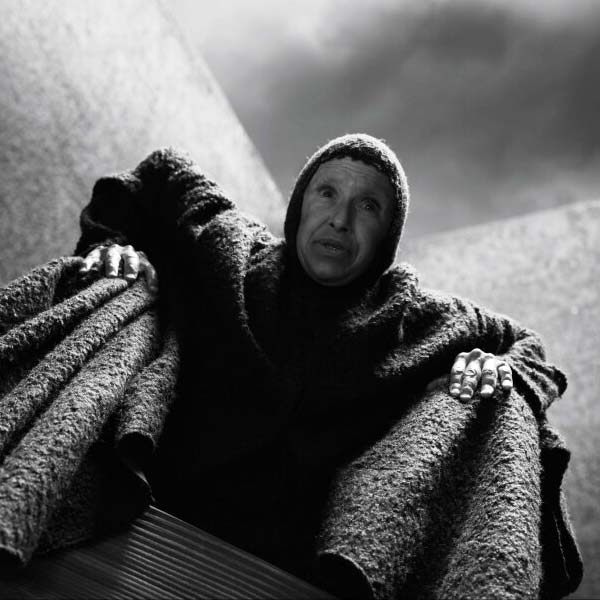 Kathryn Hunter as The Witches 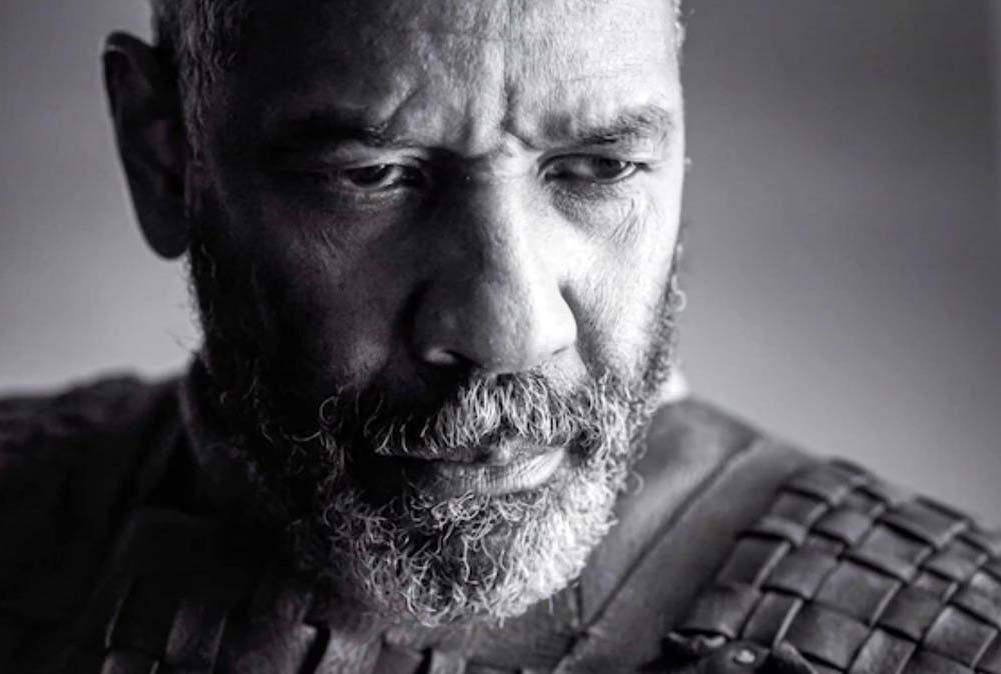 "This is a work that greatly repays the theatrical experience, not just with its mesmerizing imagery, but also with its gut-churning sound design and powerful use of Carter Burwell’s suspenseful score, full of thundering percussion and insidious strings." - David Rooney, Hollywood Reporter, Sept. 24, 2021.

"The Tragedy of Macbeth visually leans into a noirish interpretation. It’s shot in silvery, at times gothic black and white by Bruno Delbonnel, has a moody score by the great Carter Burwell, and takes place on incredible (and obviously fake) sets designed by Stefan Dechant. It also has more fog than San Francisco, the setting for so many great noirs." - Odie Henderson, RogerEbert.com, Dec. 23, 2021.

"What lingers in the mind after this version of The Tragedy of Macbeth is not specific line deliveries or bravura acting moments—although the cast all acquit themselves well—but images and sounds. The smear of blood on Macbeth’s cheek. The circling crows. The fog out of which characters emerge. The ominous strings of Carter Burwell’s score. The dripping and knocking and pounding. These fragments remain, like the shards of a dream, one you’re happy to have awakened from but also long to return to, so you can discover what profundities lie within." - Isaac Butler, Slate, Jan. 14, 2022.

"Within the world that Coen and his prodigious cast have created — with the help of Carter Burwell’s moody score and Corey Hawkins’s brief but impressive turn as Macduff — The Tragedy of Macbeth becomes both a filmy dreamscape and taut documentary, of how love and loyalty, mythologizing and madness can feed into desperate acts of entitlement and self-belief. This stuff never gets old, in art or entertainment: an enduring truth to which this production attests with a dazzling combination of simplicity, poetry and unsparing insight." - Anne Hornaday, Washington Post, Dec 21, 2021.

"Moreover, the cinematography by Bruno Delbonnel, and the score by Carter Burwell, both frequent Coen Brothers collaborators, contribute to the film's power." - Guy Kramer, Salon.com, Dec. 25, 2021.

"The haunting soundscape, composed by Burwell, is of a piece with its visual effects—not just the music but also the sounds of echoing footsteps, dripping (water and blood), and, especially, knocking." - James Shapiro, New York Review of Books, Jan. 23, 2022.

"Through it all thrums a steady tick-tocking heartbeat, a metronomic rhythm of heavy footsteps, portentous knocking and Carter Burwell’s lean score. Macbeth’s time is running out, and deep in Denzel Washington’s eyes there’s a sense that this Thane Of Glamis knows it. It’s that inescapable knowledge that gives this Macbeth its true sense of tragedy....” - Helen O'Hara, Empire, Oct. 17, 2021.

No Country For Old Men 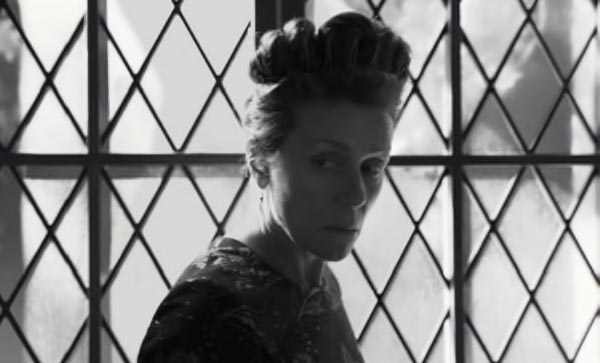 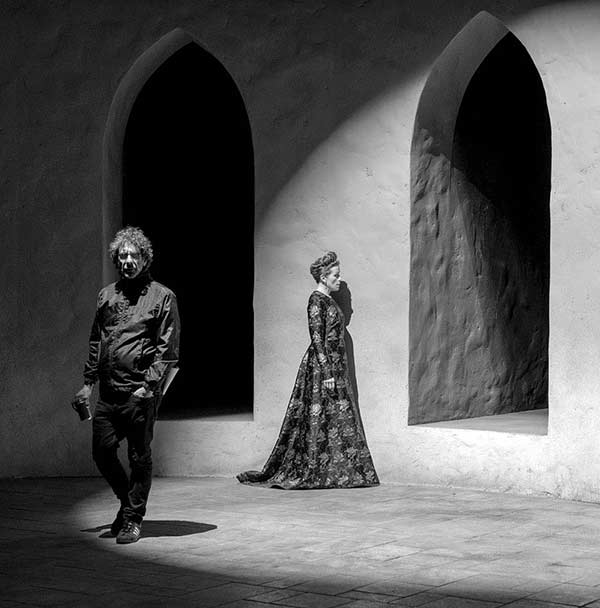