After completing my first film score, to Blood Simple, I spent some time in Japan doing animation for Lensman. Back in New York I returned to my day job running the Digital Sound Lab at the New York Institute of Technology, and continued playing in bands with no particular plan to pursue film music. Around this time I also started singing with The Harmonic Choir, David Hykes' overtone singing project which was in residence at the Cathedral of St. John the Divine in New York City. This was all exciting, but on the downside I'd recently bought a condo and, facing mortgage payments for the next 30 years, feared that I'd be doing computer work the rest of my life.

Sometime in 1985 I received a letter in a little-used post office box. It was from Burt Berman at Universal Pictures. He wanted to speak with me regarding a film project. The letter could have been months old. I called Burt and was told that Tony Perkins was going to direct Psycho III and that he wanted to speak to me about the music. As it so happens I was (and am) a big fan of Tony's. I'd even been collecting film stills of him in preparation for doing an computer-animated "Temptation of St. Anthony." I was told Tony would be at the Plaza Hotel in New York in a few days and I should give him a call.

I called around noon on the appointed day and apparently woke him up. He didn't know where or when it was, but he slowly came to and we met at his suite later that day. He'd really liked Blood Simple, felt that the musical direction of Psycho II had been too traditional, and wanted something different for his film. All this certainly sounded good to me. They wanted me to work in Los Angeles, which was fine too. 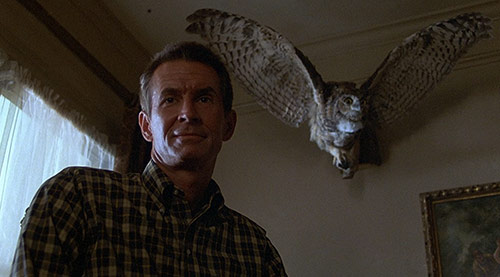 I had no agent, no experience of writing music on paper, of hiring musicians, of spotting music to picture. I really knew nothing about anything, but Tony made it clear that this was why he was hiring me. So I made out a list of equipment I'd need - in particular a workstation called a Synclavier - and moved to a furnished apartment in a complex called Oakwood which is famous for housing industry transients like myself. The cheapest Synclavier that Universal could book was in a industrial park in the San Fernando Valley - a very nondescript building whose few employees drove Ferrari's. They tried to hide the real purpose of the building from me, for fear that Universal would balk, but as I explored the occasional unlocked door I realized that they made and distributed porn videos. They'd bought the Synclavier for their in-house composer.

Tony had made Psycho III with a dark comedic eye, and Universal became concerned that a traditional horror-film audience wouldn't get it, so they asked him to "add more blood." The additional photography extended my stay in L.A. but gave me the chance to hang around the set and the Universal backlot. I would also loll about Burt Berman's bungalow picking up tips on how the business worked - agents, schedules, budgets, soundtrack albums, etc.

Tony Perkins and the Bates home

For me, Universal was living film history. Hilton Green, who was producing Psycho III, had been assistant director on the original Psycho and we spoke about Hitchcock and his imperial presence on the backlot. And speaking of imperial, Tony once introduced me to Lew Wasserman at the commisary. It was all a New York film lover could ask for.

The final score to the picture was executed on Synclavier, percussion by Steve Forman, with women's and boy's choirs. Norman Bates plays piano in one scene of the film, and I tried to get Tony to play the theme I'd written for him, but syncing his fingers to the picture was difficult and in the end I did it myself. We did get a chance to work together some more when the studio raised the question of "pop songs." 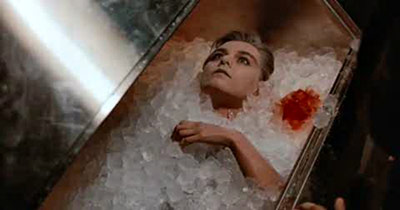 At that time - as happens sporadically in the industry - the studios were convinced that their films must contain pop songs for promotional reasons. MTV had just become a form of "free publicity" for the film business and Universal pushed Tony to find some pop artist who could get air play. Tony had been very independent about the use of source music in the film (As he pointed out to me many times, he was only willing to be in the film if the studio let him make it the way he wanted - and what did the studio care as long as it said "Psycho" on the marquee?). There are several songs in the film that were written and/or performed by me and my friends Steve Bray and Stanton Miranda ("Dirty Street" and "Catherine Mary" are examples). The studio didn't consider us bankable, however.

One by one, bands were put in front of Tony and myself and we nixed them - typically because we didn't feel they had any "Norman" in them. At one point I got together with another young composer from a pop background. Danny Elfman had just scored Pee Wee's Big Adventure and we talked about how one might create a pop song for Psycho III. Danny's idea was to sample Bernard Herrmann's string stabs from the first Psycho and use them as a rhythm bed. This time Universal nixed the idea. 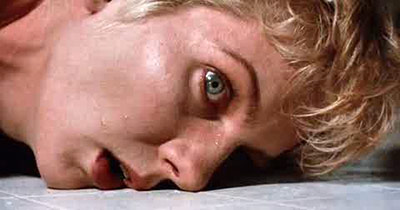 Finally Tony got what he wanted through sheer stubborness - Universal let us take a theme from the underscore and develop it into an instrumental with at least some pop vibe. I worked on it with Steve Bray and David Sanborn and we called it "Scream of Love." It clearly had no potential for radio play, but it was the only solution Universal was going to get so they went with it. They had Arthur Baker do some dance remixes on 12" vinyl and we even made a music video featuring me, Tony and a Hitchcockian blonde. Eventually Tony presented the video on MTV as a guest VJ.

I spent three or four months in L.A. in all, and by the time it was done I felt I'd had a rich and complete experience. I've never felt compelled to live there again. 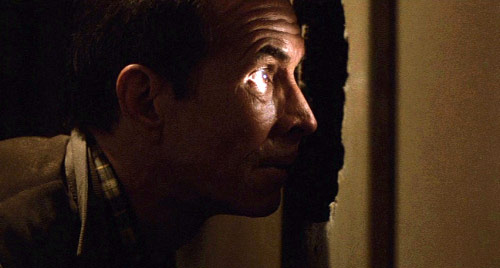 Composed and Arranged by Carter Burwell 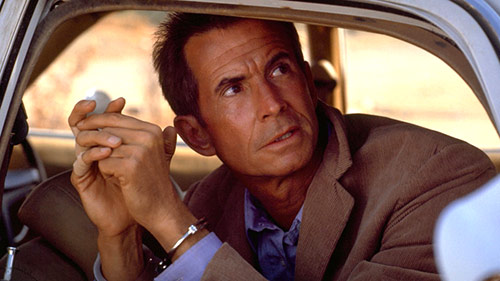 Years after the film was made, I was interviewed by Jason Allentoff for his website thepsychomovies.com:

How did you get hired to do the music for Psycho III?

I received a letter in a seldom-used mailbox, from Universal Pictures' music department.  It said they wanted to speak to me about a film project.  At this point I believe I'd only scored one film, Blood Simple, and didn't have plans to do another.  They put me in touch with Tony Perkins, who was directing, and we met up at his suite at the Plaza Hotel.  He told me he'd liked the music to Blood Simple and wanted to do something with the music in Psycho III that would be different from the previous Psycho films.

How was it working with Anthony Perkins and what were your impressions of him?

The only time I remember being star-struck in this business was working with Tony.  I was a big fan, and this did somewhat get in the way since I was initially tongue-tied.  His sense of humor was so dry that I still don't really know whether he was joking with me a lot of the time.  I assume he was. They did additional photography on the film - because the studio had requested more blood, according to Tony - so I did spend some time on the set.  He seemed to direct in a more "collegial" way than I've ever seen - asking the entire crew to offer comments or suggestions after every shot.

Explain your collaboration with the many artists on the music of the film including legendary saxophone player David Sanborn. Also, according to the original soundtrack album, Scream of Love was originally set to be the title song to the film.  What happened that caused this change?

My friends Stanton Miranda, Steve Bray and I wrote and recorded a lot of the "source" music which issues from jukeboxes and radios in the film.  The basic tracks of "Scream of Love" were written for one of scenes in the film - I believe it's in Jeff Fahey's character's room.  After the film was completed Universal raised the question of having some kind of pop single on the soundtrack album.  This was in the days when having such a single playing on MTV provided free promotion for the film.  Tony objected to the idea of placing a song unrelated to the film in the soundtrack just to satisfy these PR concerns - although that's of course what is normally done.   We tried a few directions.  We had Stan Ridgeway write some lyrics to my main theme (the one playing as Maureen walks across the desert in the beginning of the film).  Danny Elfman and I worked on a track based on samples of Hermann's original string licks.  In the end we decided to just call "Scream of Love" our "single".  We developed the piece further, with David Sanborn layering sax tracks.  The record company moved the track to the first place on the album and had Arthur Baker do a remix of it.  And, somewhat unbelievably, they shot a music video with me and Tony.  Tony played the video on a Halloween MTV special when he was the guest VJ.

What was your impression of the movie when you saw it complete with music?

It's not a great film, but it was my first experience in Hollywood and I'll always be thankful to Tony for it. 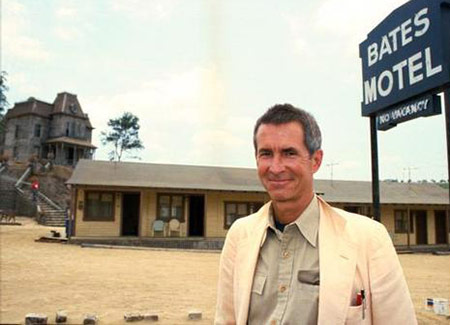 Tony Perkins in a casual mood

Here are excerpts from the score, which is available on vinyl from Amazon. 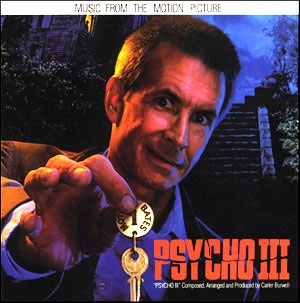 These are remixes of some pieces from "Psycho III" by various artists. I had nothing to do with their creation, other than writing the original material. 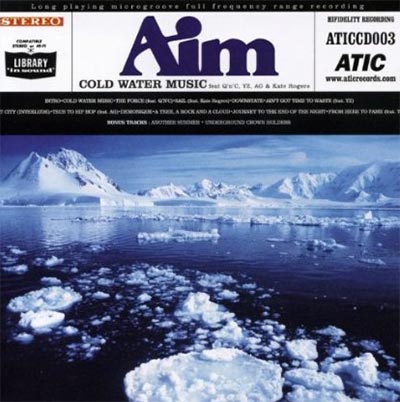 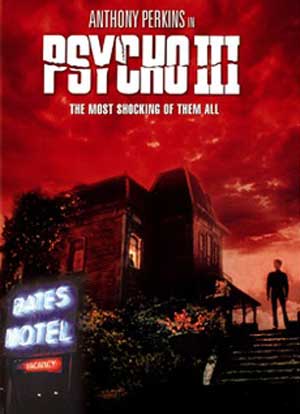 Other Music by Carter Burwell 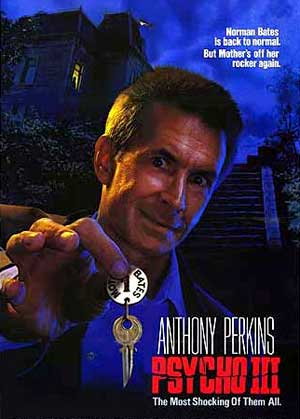 Tony Perkins introducing the music video of "Scream of Love" on MTV (transferred from VHS). (4:26)

"...Unlike most sequels, which seem to get bigger, fancier and emptier the further removed they are from their source material, 'Psycho III' has a lean, servicable, stripped-down quality to it.... 'Pyscho III' expresses its appreciation of its Hitchcock legacy without seeming to rip it off." - Vincent Canby, New York Times, July 2, 1986 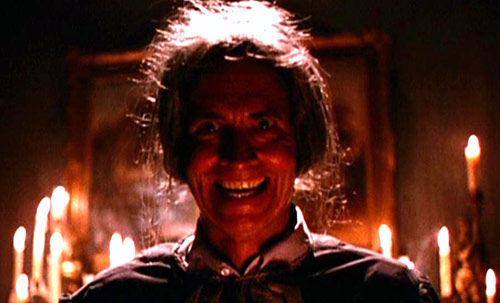