When David Mamet spoke to me about The Spanish Prisoner, he told he saw the film in the vein of French crime dramas, like Bob Le Flambeur, or Rififi. That got me thinking about a cabaret band - the kind that has one instrument of every family. One string, one wind, one brass, one percussion instrument, and of course accordion. These kind of ensembles are cheap but have a broad palette.

To match the ever-shifting ground of the story I kept the themes chromatic - never settling on a key - and to keep harmonies vague I used instruments with minimal overtones, like vibe and flute. At one point David confessed that the sound of flute gave him shpilkes, which as a gentile I translated as the willies. It happens sometimes that one instrument is anathema to a director, and in this case it was flute, so I had to sometimes reach for other sounds. Actually, I know several directors who get shpilkes from flute. Why does this instrument provoke such strong feelings? I'm going to keep pushing it into film scores until I fnd out.

Written and directed by David Mamet

Here are examples from the score to The Spanish Prisoner: 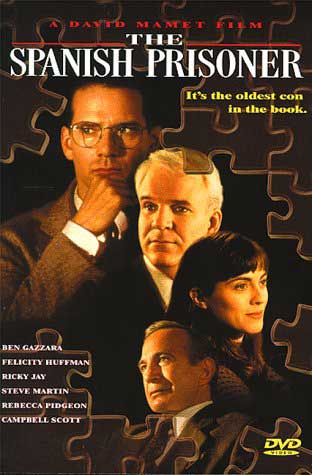 "Music by Carter Burwell, whose moodily effective compositions are most familiar from the Coen brothers' films, does a nice job of swirling mysteriously and discreetly jangling nerves." - Janet Maslin, New York Times, April 3, 1998.

"If you’re prepared to ignore the plot’s absurdities, the film is addictive, and Carter Burwell’s score works on you like a massage." - Anthony Lane, The New Yorker, April 20, 1998.

"Burwell's Spanish Prisoner is a subdued, svelte, and enigmatic effort that oozes charming menace. The chamber dance band score has traditionally been more of a European aesthetic, so it's wonderful to see it applied to an American thriller... It's a score with a strongly cast musical identity--a kind of dirty little tango--which adds to our perception of the film without altering it. (Kudos also to writer/director David Mamet for having courage enough to allow music to color his words.) Burwell's harmonic palette is stocked with thick jazz chords, stretched eastern intervals and modern chromaticism, all of which are applied to a cabaret dance band-style ensemble (accordion, harp, vibes, tuba, bass, percussion) to lend the film's con game a sense of choreographed grace. Time and time again, Burwell has shown his talent for encapsulating non-musical ideas in his work. In The Spanish Prisoner, he not only neatly divines the film's gist, he gives it a unique sonic world in which to dwell." - Doug Adams, Film Score Monthly, 1998.