The first thing I did on "Where The Wild Things Are" was to be fired. I think it was in 2005 that Spike Jonze called to tell me was going to Australia to begin shooting "Where The Wild Things Are," and that he would not be asking me to write music for the film. He said it in the nicest possible way. I had written the music for Spike's previous feature films (Being John Malkovich and Adaptation), but Spike wanted Karen O (of the Yeah Yeah Yeah's) to write music for the "Wild Things." 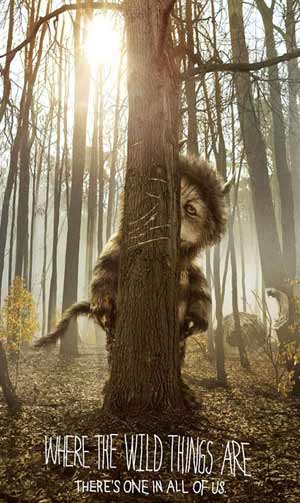 Around this time I was taking a two-year break from film scoring to spend more time with my family and pursue other interests, so Spike's film receded from my consciousness until he called me in the Summer of 2007 to ask if I'd come to a screening.

Apparently this was an early screening. Warner Brothers was not invited. The film was long, as all rough cuts are, and had no special effects. Karen's songs were in it but so was a lot of other music playing the role of score (what we call "temp music"). The tone of the film was dark, but in a way that was sincerely reminiscent of childhood itself.

Afterward we had lunch and discussed the film and the musical situation. Spike knew he would have a battle with Warner Brothers over the tone of the film. He also suspected that the songs might not be able to do everything the film needed musically. These two issues were not unrelated. At the very least Warner Brothers was going to want to clarify the emotional tone of the film, and music is a powerful way to do so.

Spike was not asking me to write music for the film - only for my opinions, which I gladly gave him. He still hoped that remixes or rearrangements of Karen's songs (which were fantastic) would suffice to score the film. I think he was influenced by the experience Sofia Coppola (Spike's ex-wife) had with her film "The Virgin Suicides". The entire film had been scored with remixes of a few themes by the band Air. 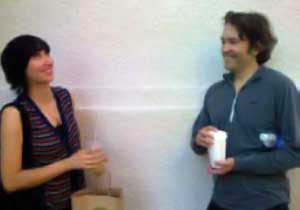 The meeting of Karen O and Carter Burwell

Sometime during the next few months my role changed from advisor to composer. I can't say how or when this happened exactly. I just started sending Spike thematic ideas and he'd give me his reaction. Writing music for film always involves certain constraints, but here there were more than usual. My music would have to match Karen's in instrumentation and feeling. It would have to follow Max's emotional journey in detail, as that experience takes the place of plot in the film. My music would have to make it clear to Warner Brothers, if no one else, what the film was about.

The first theme I wrote was called "Lost Fur" and it played nicely on some early scenes of Max at home. While I continued working, Warner Brothers planned a preview screening to test how a sample audience would react to the film. I wanted to come to the screening but Warners declined to fly me out (I live in New York and the screening was in Los Angeles). I'd forgotten that, although the film had some of my music in it already, they hadn't actually hired me yet. I was just helping Spike out. 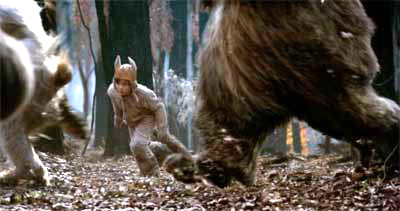 After the screening the film went on a crazy ride in which Warner Brothers and Spike fought about the type of film they were making. I was told simply to stop work.

The following year I was asked to join officially as composer. After some editing and rewriting the film was in a form that both Spike and Warner Brothers could embrace. Spike and Karen and I "spotted" the film several times - parcelling out who would be responsible for the music in each scene. We'd audition our results for each other and have another meeting where we'd politely, sometimes desperately, trade scenes. Completely by chance we each ended up having written about half of the music in the film.

Of course Karen's songs will be much more prominent in the minds of listeners - this is the nature of song as opposed to score. She's worked on the film since before it was shot and I think it's perfectly right that she has that foreground role. And did I mention before? Her songs are outstanding.

The film credit reads "Score by Karen O and Carter Burwell". Karen wrote the songs and Carter wrote the instrumental music, but Spike never chose to divide the film up that way. And since Karen sings wordless vocals on both her own and Carter's pieces the distinction is wonderfully vague. 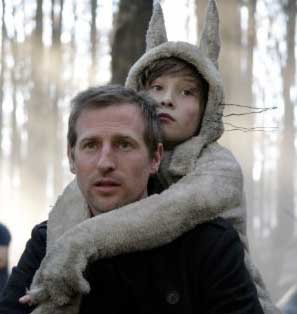 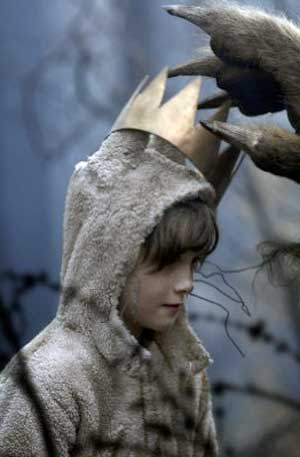 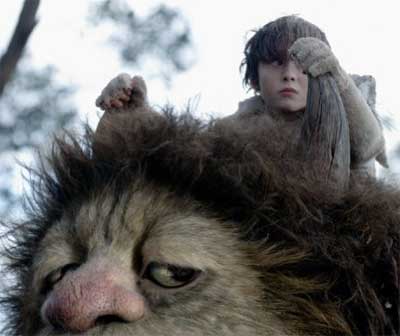 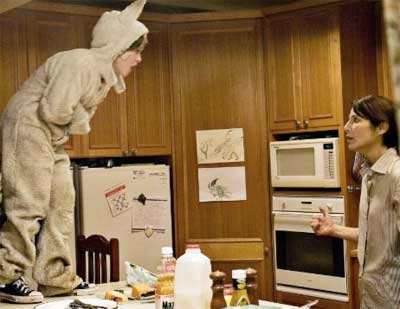 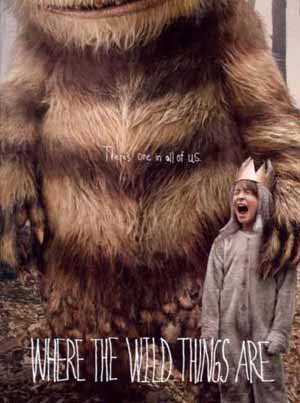 The Score Soundtrack contains Carter Burwell's score but not Karen O's songs. Here are excerpts from score, which is available for download from Amazon 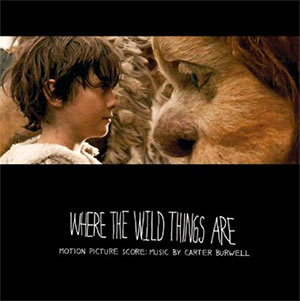 The Song Soundtrack contains 13 songs by Karen and the Kids and one piece by Carter Burwell. 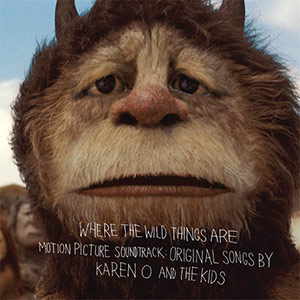 This is a book of sheet music from the film in piano / vocal / chord form. It contains "All Is Love", "Worried Shoes", "Rumpus", "Hideaway", "Lost Fur" and "Heads Up". It's published by Alfred Publishing and should be available from various music stores as well as these: 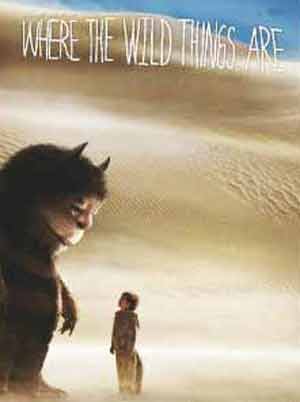 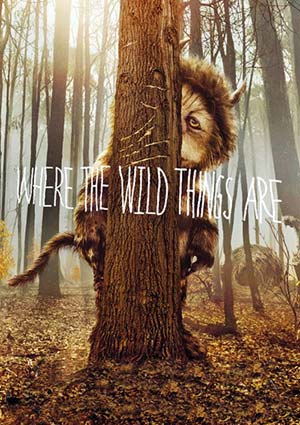 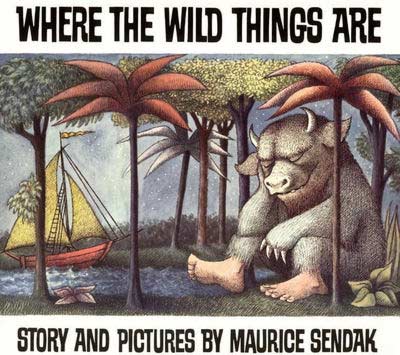 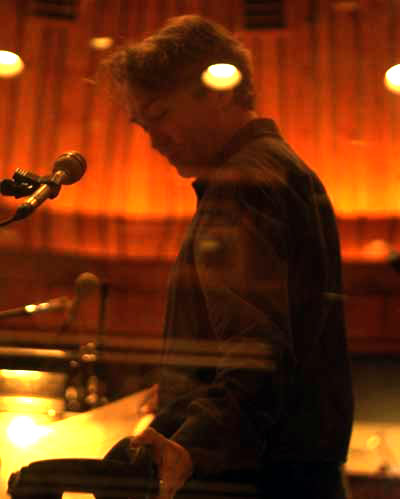 Carter at the podium
(photo by Lance Bangs) 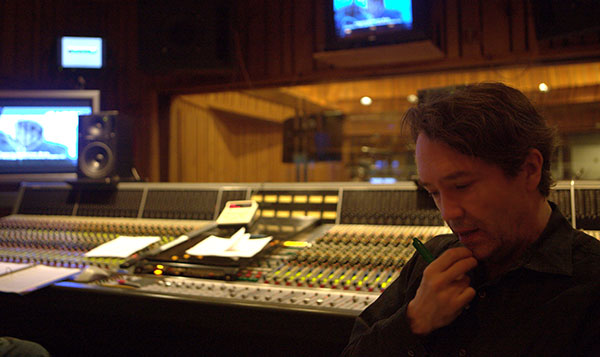 Carter in the Control Room
(photo by Lance Bangs)

The score was recorded in April, 2009 at Avatar Studios in New York City, a classic rock'n'roll studio that used to be called Power Station. The sessions were notable partly because there were kids in the control room all the time. We even had a local pre-school bring a busload of kids as a field trip. 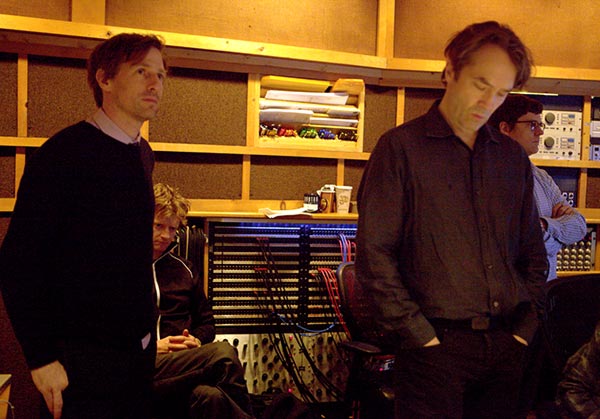 Spike and Carter in Control Room
(photo by Lance Bangs) 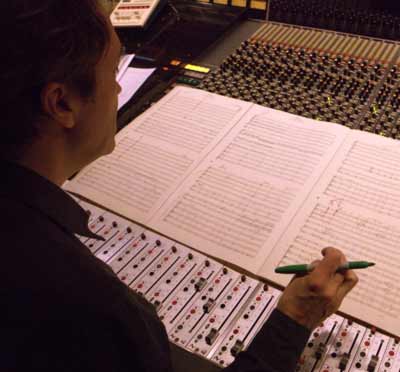 Carter Burwell at the mixer
(photo by Lance Bangs) 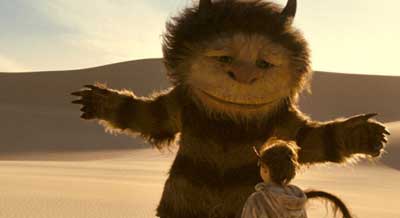 "Will today's media-saturated kids look on them as quaint imitations of monsters they've known, if not loved, on the big screen and TV? That remains to be seen. What seems certain is that the physical and vocal music of the wild things—the glorious music on the sound track was written by Karen O and Carter Burwell—will strike a deep chord with filmgoers who've read the book to their children, or who remember having had it read to them." - Joe Morgenstern, Wall Street Journal, October 16, 2009.

"... On occasion, Mr. Jonze lingers too long on his lovely pictures, particularly on the island, where the film’s energy starts to wane, despite the glorious whoops in Carter Burwell and Karen O’s score. Mr. Jonze loves Max’s wild things, but you don’t need to hang around long to adore them as well. Yet these are minor complaints about a film that often dazzles during its quietest moments, as when Max sets sail, and you intuit his pluck and will from the close-ups of him staring into the unknown. He looms large here, as we do inside our heads. But when the view abruptly shifts to an overhead shot, you see that the boat is simply a speck amid an overwhelming vastness. This is the human condition, in two eloquent images." - Manohla Dargis, New York Times, October 16, 2009.

"... Also worth noting is the score from Carter Burwell and Karen O (the frontwoman of the Yeah Yeah Yeahs). Whether trading in disconsolate howls or more soothing plaintive rhythms - the track Hideaway is a particular standout - the music connects emotionally, and may be singled out for awards consideration." - Brett Simon, Screen Daily, October 11, 2009.

"... A rock-pop score by Karen O and Carter Burwell tries too hard and at too loud a pitch." - Kirk Honeycutt, Hollywood Reporter, October 11, 2009.

"The voice performances, especially from Gandolfini and O'Hara, are pitch-perfect, as is the tribal score from Carter Burwell and Karen O." - Joe Neumaier, New York Daily News, October 16, 2009.

"The alt-rock tenor of the music scoring is refreshing at first, but the predictability of the music cues proves increasingly wearisome." - Todd McCarthy, Variety, October 11, 2009. 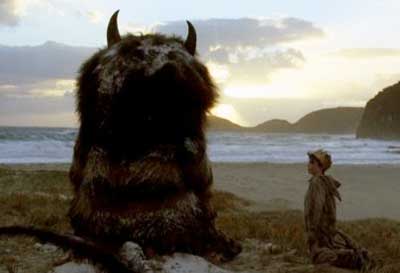