I'm fortunate to work with filmmakers who write (many don't), who love the written word as well as the visual, and I enjoy reading screenplays. Scripts are sent to me before a film is shot, generally so I can decide if the film is something I want to work on. Sometimes while reading, I'll get a sense of the problems music can address, maybe even the type of music. But in the case of Catherine, Called Birdy, I knew not only what type of music it would be, but who should perform it.

Birdy takes place in the year 1290, in England. That immediately raises the question - do I use period instruments? That palette (lute, fiddle, trumpet...) limits the dramatic range of the score a bit, as well as its appeal to the audience. Also, Birdy's story is told entirely from her point of view (the book is in the form of a diary), and the music must place you squarely in the mind of a nonconformist 14-year-old. This is not a lute and sackbut kid.

It seemed clear to me that vocals would work, in particular a female voice. Birdy's musical voice would have to be playful, but also capable of the wild emotional swings of adolescence. As I read the script I knew I wanted the music to be performed by Roomful of Teeth

I knew the group from their recording of Caroline Shaw's "Partita for 8 Voices", a joyful survey of sound and form that showcases the capabilities of this eight-voice ensemble. But I didn't know if they'd have any interest in working on a film. Fortunately they did. I also had to convince the companies making the film, Working Title and Amazon Studios, that it was worth the time, money and effort to record this far-flung and busy group, instead of simply hiring 8 studio vocalists. Fortunately they agreed.

In order to demostrate my concept to Lena Dunham and the producers, I put together a demo of about a dozen a capella recordings from artists including the Swingle Singers and Meredith Monk as well as Roomful of Teeth. One thing I frankly copped from the Swingles' first album of jazz-inflected Bach was the use of upright bass. It provides a solid bottom octave and a percussive element that both grounds the music and helps it swing. Happily John Patitucci, with whom I've worked many times, played that part.

The experience of writing for this ensemble was so enjoyable, I'd happily be doing it still today if we didn't have to finish the film at a certain date. But I'm also aware that a vocal score has built-in issues as well as benefits. The story of Catherine, Called Birdy, taken as it is from a fictional journal, is told verbally, so there is dialogue throughout the film. Mixing that against a score of eight more voices is a challenge - the vocals could interfere with the dialogue. But I think Mike Prestwood Smith, the re-recording mixer, dealt with this well - even if there are moments where I wish the music were louder. But haven't I thought that about every film I've worked on? 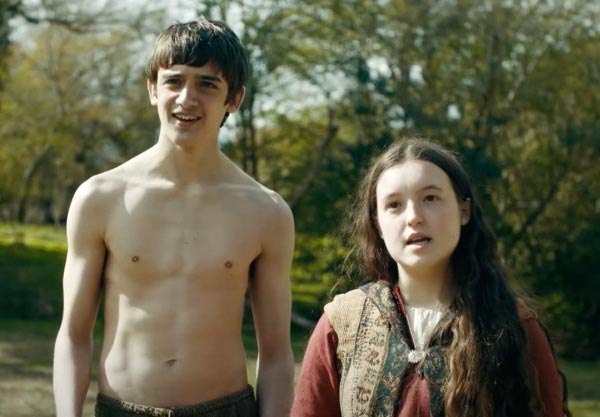 Composed and Orchestrated by Carter Burwell 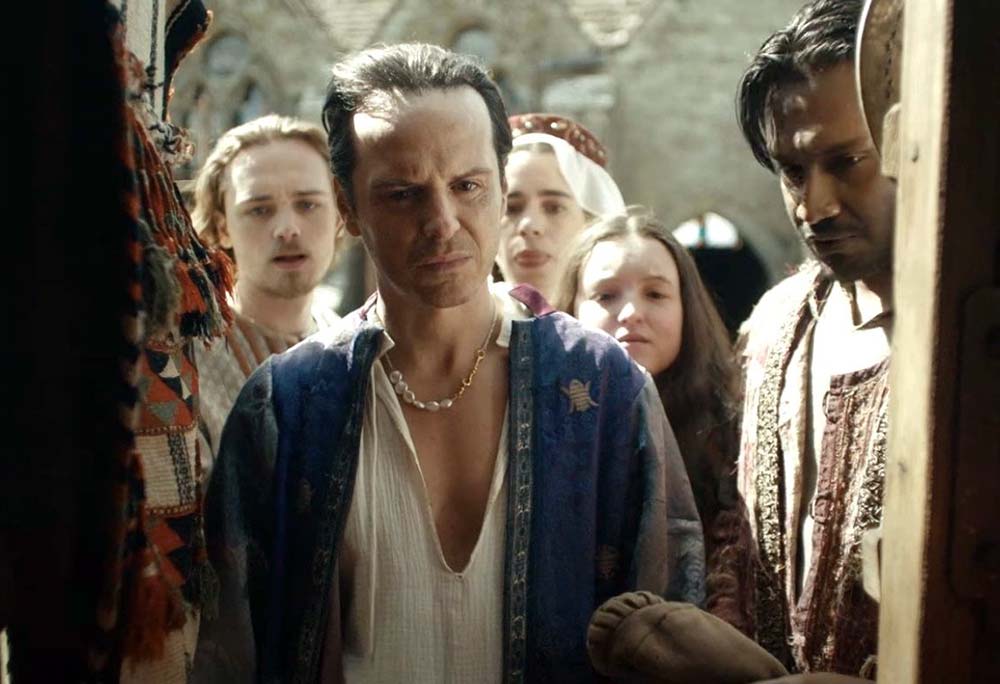 The score is available from Milan Records on Amazon, Apple Music and other platforms. Here, for demo purposes, are some excerpts: 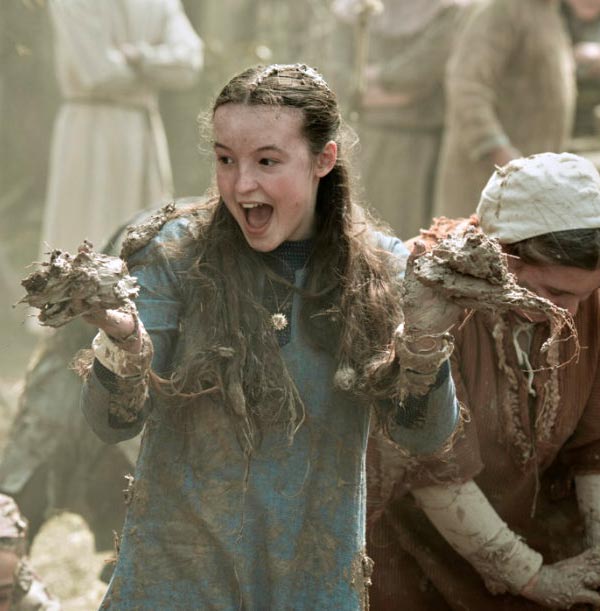 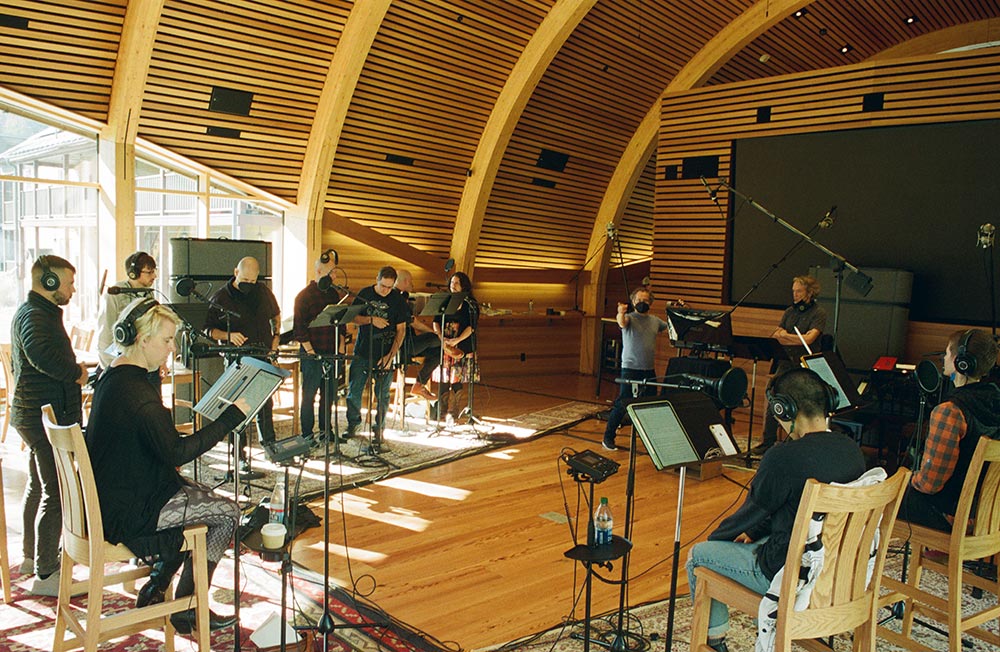 .
Carter, Alex and Roomful of Teeth at Studio 9
Photo by Dean Parker

The members of Roomful of Teeth are well dispersed around the U.S. and Europe, so it wasn't obvious where we should bring them together to record. Every summer they coalesce as artists-in-residence at Mass MOCA in the Berkshire Mountains of Massachusetts, and they've often recorded in a studio adjacent to that site, Studio 9 at Porches. We decided that location made as much sense as any.

Alex Venguer and Neal Shaw came up from New York to engineer the recording, with help from Studio 9's Dave Dennison and Roomful's Randall Squires. My assistant Dean Parker co-produced the recording with me.

John Patitucci had to record his parts before we went to the Berkshires because he was preparing for the premiere of Wayne Shorter's opera Iphigenia. As it so happened, the opera was performed at Mass MOCA while we were there recording, a coincidence and a thrill.

Roomful of Teeth's parts were all recorded live, without overdubbing, for a lively authenticity. When I listen on headphones I can clearly identify each of the singers and where they're standing in the room. I love the frankness of it. 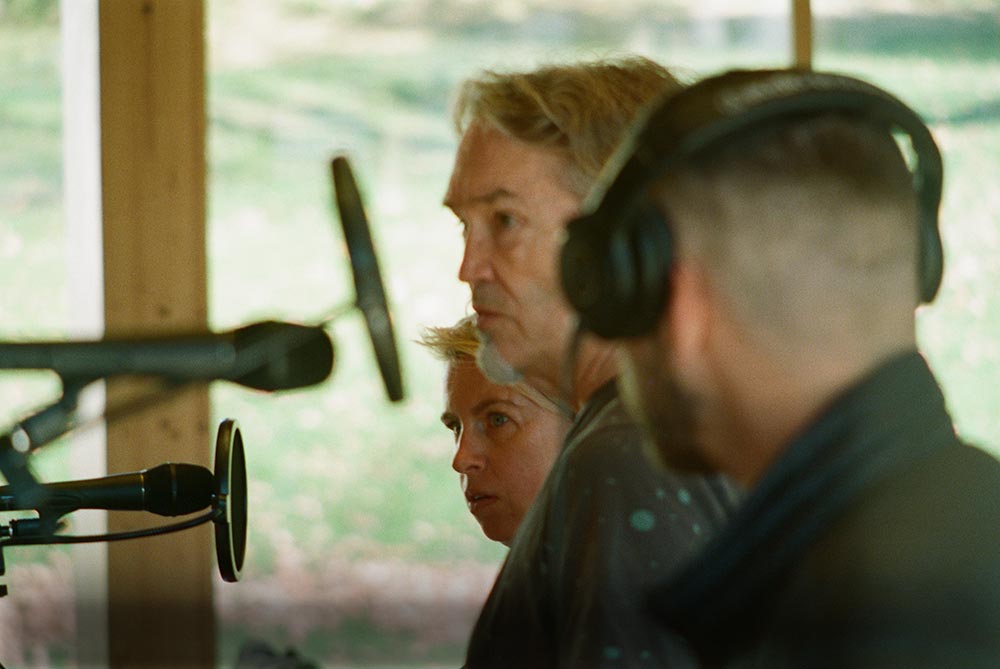 "Dunham displays real growth as a filmmaker, not just in obvious, surface ways like the striking look (Laurie Rose is the cinematographer), sound (the music is by the great Carter Burwell), period settings, and dress. It’s the smoothness of the camerawork, the clarity of the compositions, the consistency of the performances, and most of all—and this has always been a tricky element for Dunham, up to and including the mostly successful 'Sharp Stick'—the evenness of tone." - Jason Bailey, The Playlist, Sept. 11, 2022.

"Dunham worked alongside the medieval scholar Helen Castor to understand the nuances of the period while diverging from the historical record when she saw fit. An example: The score by Carter Burwell, sung by the group Roomful of Teeth, invokes choral music, while the soundtrack is filled with Misty Miller’s covers of pop songs like Supergrass’s 'Alright' and Mazzy Star’s 'Fade Into You.' " - Esther Zuckerman, Sept. 23, 2022. 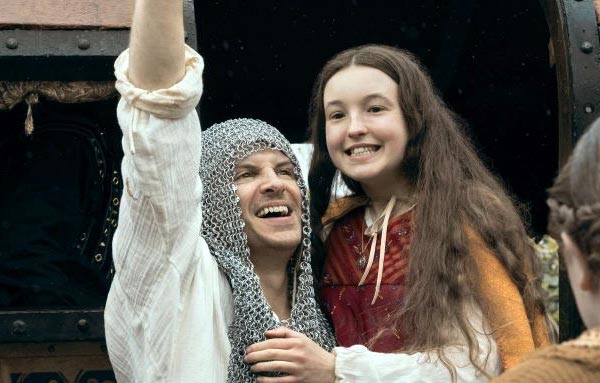