Screenplay by Josh Singer
based on the books Inside WikiLeaks: My Time with Julian Assange at the World's Most Dangerous Website by Daniel Domscheit-Berg, and WikiLeaks: Inside Julian Assange's War on Secrecy by David Leigh and Luke Harding 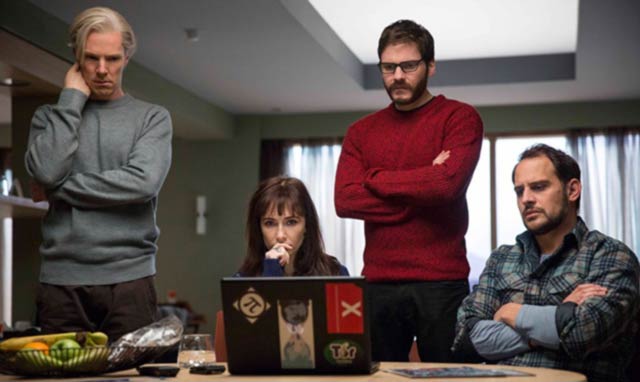 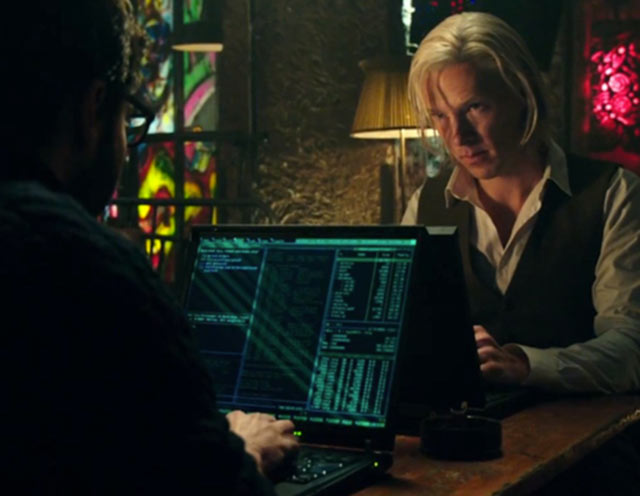 Daniel and Julian at Laptops

For myself there was an open question about what kind of film this would be. When I read the script I thought the relationship between Daniel Berg and Julian Assange was its center. To understand Assange's character I read "The Unauthorized Autobiography of Julian Assange" and concluded that his theme should be that of a damaged child. I felt that if I could make him approachable or sympathetic, I'd have really achieved something. However the personal aspect of the film was more and more subsumed by the political.

As Berg joins Wikileaks, he imagines himself to be part of an international intrigue. I wrote music to play the politcal thriller in Daniel's head, and as it developed in post-production, the film more and more imagined itself to be a thriller as well, and in the end there was almost non-stop electronic motion in the score. Personally I would have preferred less music in the film but Bill Condon, the director, seemed concerned that all the talk and typing would leave the audience uninvolved. And Bill is, honestly, a master at using music to tell a story. 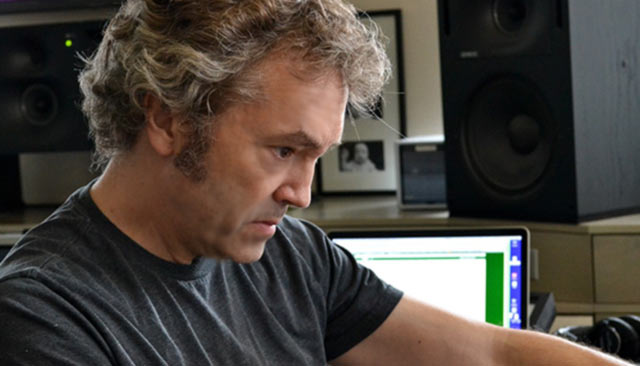 This film takes place during the years leading up to Wikileaks' release of U.S. State Dept. cables in 2010, largely within the milieu of European hackers. While the story also involves traditional newspaper reporters and government functionaries, the two main characters, Julian Assange and Daniel Berg, live the lives of hacktivists, and the music for the film had to come from that digital world.

The real Daniel Berg sent us samples of the music he and his friends listened to in Berlin at the time, but it wasn't as edgy as the world pictured in the film. So we went a different direction. 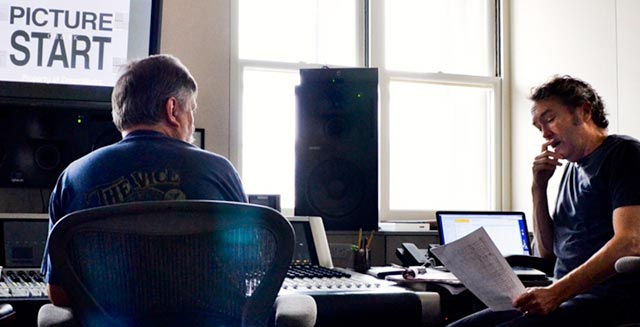 Mike Farrow and Carter Burwell
in The Body Studio

Although I began as an electronic musician in the 1970s and 80s, the sonic times have changed and I came to realize I needed a more contemporary working method. I reached out to Johnny Klimek and Reinhold Heil for advice (they composed the score to the film Run Lola Run, which I loved). They recommended Gabriel Mounsey as a remix artist and composer in his own right.

He and I settled on a working method wherein I would send him multi-tracks of my compositions, synced to picture; he would remix them and send them back, still in sync; and I would then re-re-mix his re-mixes to be sure the music was still saying what I wanted. After the first few tries it went quite well, and he remixed about a quarter of the cues in the film.

If you had asked me two weeks before completing the score, I'd have told you it would be almost entirely electronic, with some effected guitar work by my friend David Torn. But in a late meeting I had with Bill Condon, it became clear that he wanted some emotional tones that required a more traditional orchestration. In particular the last 15 mintues of the film, when the drama has largely ended with the destruction of the Wikileaks platform, needed something different but still related to the body of the score. So the electronics are largely left behind and strings and winds bring the score to a very open-ended conclusion. 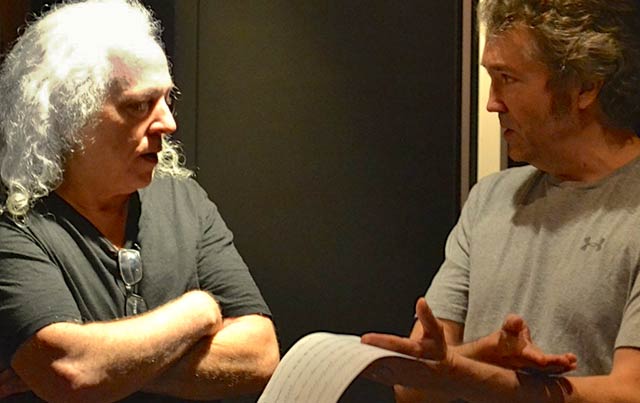 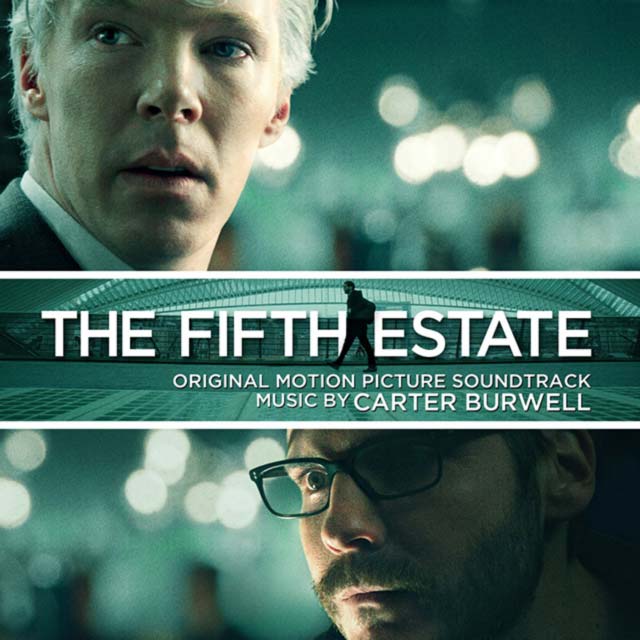 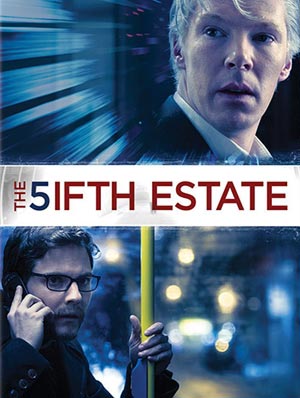 It may be decades before we understand the full impact of WikiLeaks and how it's revolutionized the spread of information. So this film won't claim any long view authority on its subject, or attempt any final judgment. We want to explore the complexities and challenges of transparency in the information age and, we hope, enliven and enrich the conversations WikiLeaks has already provoked. - Bill Condon, 2013 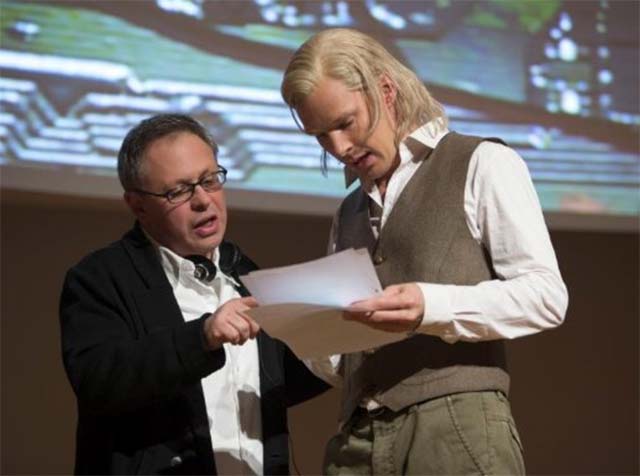 "...Both the kindest and most damning thing you can say about 'The Fifth Estate' is that it primarily hobbles itself by trying to cram in more context-needy material than any single drama should have to bear... Condon, usually a director of admirable cogency and restraint, lays on a battery of audiovisual tactics (onscreen text, graphics, split screen, vertical wipes, etc.), largely set to techno tracks or Carter Burwell’s equally pounding score. Tobias Schliesser’s camera often jitters as if on its 10th espresso, while Virginia Katz’s editing seldom pauses for breath. There’s conceptual logic behind these decisions, but they are as frequently off-putting as they are thematically apt." - Dennis Harvey, Variety, Sept. 5, 2013

"...its composer is doing a lot more than scratching a beat, reaching into psychology with a haunting effect that plays both the cold excitement of the internet, and the flawed people realizing the ultimate cost of good intentions in a planet that’s speeding from one message to the next." - Daniel Schweiger, AssignmentX, Dec. 19, 2013.

"...Condon is also too reliant on montages to cram in a ton of information while simultaneously providing a sense of movement as Assange and Berg hop from one major European city to the next collecting secret information. To the tune of Carter Burwell's thumping techno score to go with the frequently sleek architecture, this technique often makes 'The Fifth Estate' feel like a glossy travelogue..." - Christy Lemire, RogerEbert.com, Oct. 18, 2013.

"...The highlight of the film for me, the score created by Carter Burwell was edgy, slick, and again reminded me of the modern feel of The Social Network. This score is not quite up to par with that one, but it is very imaginative. I felt like I was in a Euro dance club at times (which did happen more than once in the film) and that gave me a real feeling as to where this movie took place. It never felt American to me, and I give credit to Burwell for scoring a film in a way that keeps us at a global perspective." - Scott Pollard, InSession Film, Oct. 16, 2013. 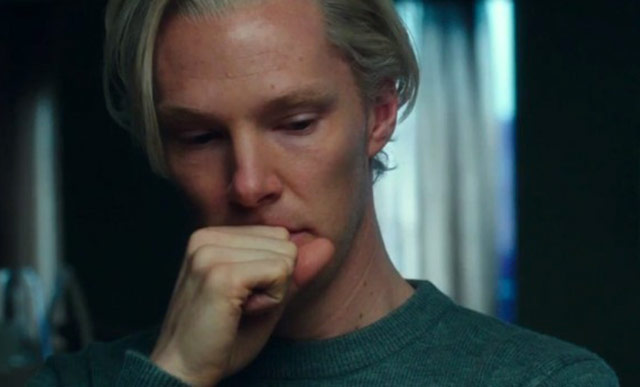