Two well-defined themes in Goodbye Christopher Robin are the play of imagination, and the trauma of war. As the film begins, A. A. Milne, a successful playwright and writer of humorous verse, returns from World War I traumatized and certain that he needs to awaken his fellow Britons to the folly of war. Milne and his wife Daphne move to the quiet of the countryside and have a son.

When Milne is forced to spend a few days alone with his son, Christopher Robin - no wife, no nanny, no cook - his son teaches him to see the world as a child. And when he starts to write about those days in “When We Were Very Young”, he provides the same service for the rest of the world. Winnie the Pooh is born.

The ironic twist is that the success of Pooh’s stories, based on the innocent play of his son Christopher Robin, ends up robbing Christopher of his innocence. And, irony upon irony, he goes off to war as a way to escape his plight. One of the riskier decisions we made with the score was to withhold the main theme until the middle of the film, when Milne begins to write and his friend Ernest Shepard begins to illustrate “Winnie The Pooh”. We did this to make that montage especially noteworthy, to make it the turning point of the story. Before that point, the music plays many things - trauma, the transition from city to country life, the awkward relations between Christopher Robin and his parents. But then Pooh changes everything. The real Christopher Robin and Pooh

In terms of instrumentation, we didn’t try to focus on the period of the film, the 1920s and 1930s, but I did think the instruments should accord with that time. I thought particularly of the English pastoral tradition, such as George Butterworth’s “Two English Idylls.”

A film composer sometimes receives very specific notes about problems the filmmakers hope to solve with music. In this case one of those had to do with Christopher Robin’s mother. American audiences had difficult understanding the British tradition of “hands off” parenting, wherein a child is largely raised by a nanny until the time when the child leaves for boarding school. But they really didn’t empathize with Daphne, who seems to resent the inconvenience of being a mother, so I was asked to do what I could to make her more “likable”. Honestly there were very few opportunities to do so in the score, but I did the little I could without being ridiculous. Suffice it to say that in real life the relationship between Christopher Robin and his mother was much, much worse than anything you see (or hear) in this film. 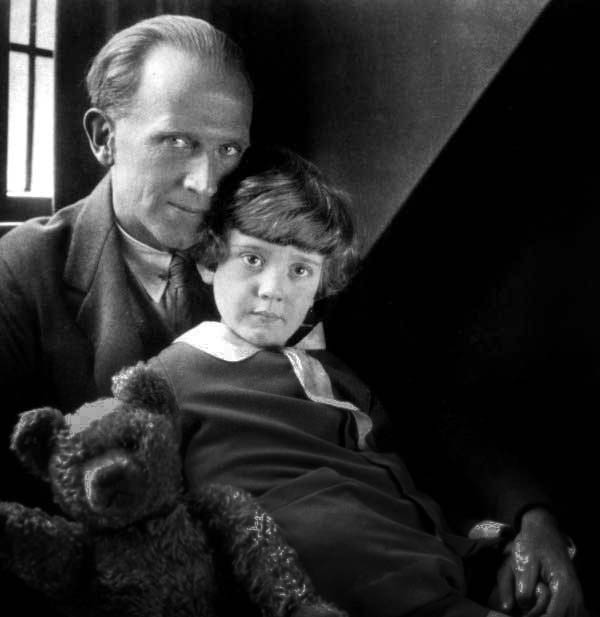 The real A. A. Milne and Christopher Robin 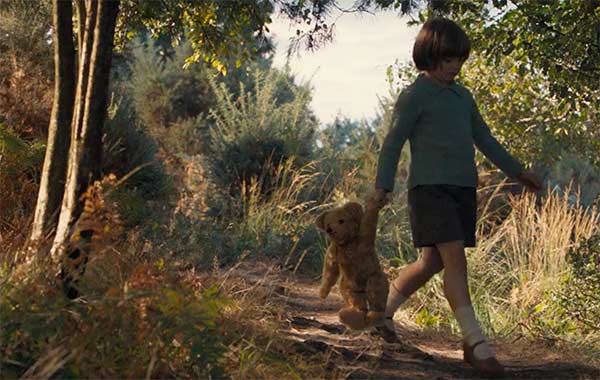 Will Tilston as Christopher Robin 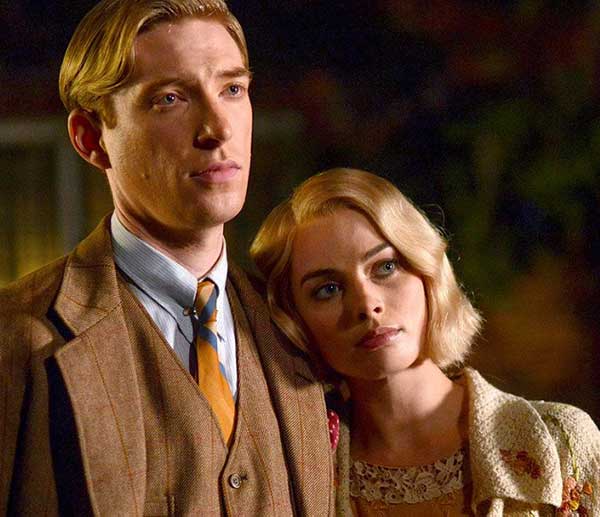 The score will be released by Sony Classical. As the release of the film gets closer I'll post more excerpts of the score here, for demo purposes: 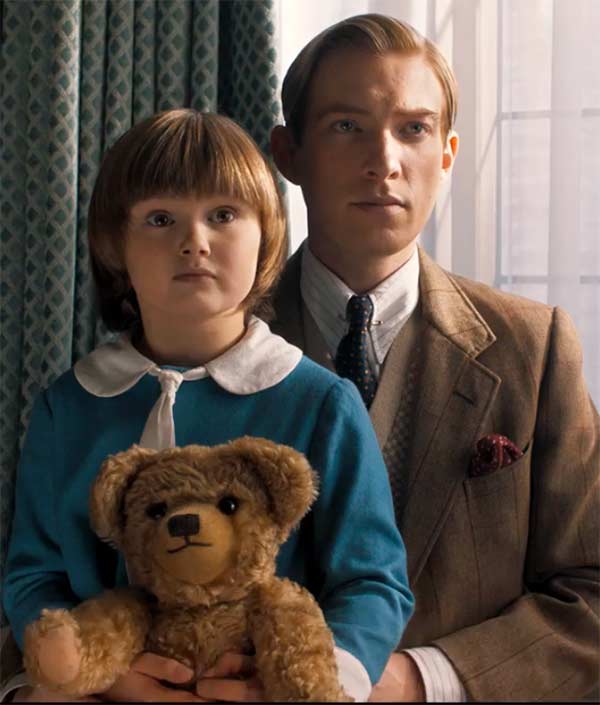 Will Tilston and Domhnall Gleeson

The real A. A. Milne and Christopher Robin

"But whether the onscreen action is obvious or subtle, Carter Burwell’s elegant score is understatement personified.
It complements the point of view that defines the film — that of Billy Moon. Like many astute kids, he sees his parents’ vulnerabilities and understands more than he can articulate." - Sheri Linden, Hollywood Reporter, Sept. 20, 2017.

"Movingly scored by Carter Burwell (who often works with the Coen brothers), "Goodbye Christopher Robin" is a film with a good supply of heart, plucking our emotional strings through the essential sweetness of the story and its darker elements of conflict. It's a fresh footnote to the story that may change hearts and minds about the cherished character." - Colin Covert, Star Tribune, Oct. 26, 2017.

“'Goodbye Christopher Robin' checks all the boxes. Drenched in dappled light and Carter Burwell’s honeyed score, Simon Curtis’s glowing picture dangles the story of how the author A. A. Milne (Domhnall Gleeson) created the Winnie-the-Pooh tales using the stuffed animals of his son, Christopher Robin (beautifully played by little Will Tilston). What we’re really watching, though, is no less than a stiffly depressing portrait of toffee-nosed child abuse." - Jeannette Catsoulis, New York Times, Oct. 11, 2017.

"'There will be a day soon when everyone has forgot about Winnie,’ Milne tells his son at one point when Billy realises this little world they created is no longer just theirs.
Of course this was never going to be true and despite the emotive music of Carter Burwell’s sweeping score and the happy but heartbreaking twist at the end, there is actually more sadness to this film than expected... Goodbye Christopher Robin will make you cry – and it may just ruin your childhood forever.” - Rebecca Lewis, Metro, Sept. 20, 2017.

"Throughout, Carter Burwell’s score tinkles and surges, employing piano and harp to pluck mercilessly at the heartstrings, assisted by Al Bowlly’s 1939 recording of A Man and His Dream." - Mark Kermode, The Guardian, Oct. 11, 2017.

"From the opening shot, as the sun splinters through the green-leafed canopy of a crooked old tree to the trills of Carter Burwell’s honey-sweet score, we know what kind of movie this is" - Peter Debruge, Variety, Sept. 20, 2017.

"Further setting the mood is the score by the Coen Brothers’ frequent collaborator Carter Burwell, which embellishes the wondrous vibe of Alan and Christopher’s time playing together in their own Hundred-Acre Wood, and nicely contrasts those scenes with the more dramatic somber moments of the film." - Sandy Schaefer, ScreenRant, Oct. 24, 2017. Kelly Macdonald and Will Tilston