This is Martin McDonagh's first feature film. It tells the story of two hit men (played by Colin Farrell and Brendan Gleeson) hiding out in the quaint medieval Belgian town of Bruges after a botched assassination in the UK. The essence of the tale is the warmth within the hard men, and their struggle with basic ethical dilemmas involving honor and compassion. A wild card is added when their boss (Ralph Fiennes) arrives to enforce his code of honor on all three.

The violent context of the story is established from the start with a prologue spoken by Farrell, and I thought it would be interesting for the music to play the fragility of the characters which is hidden for the first part of the film, as they dance around their real concerns.

The city of Bruges is also a real character, maybe the real antagonist in the film, as its quiet beauty drives Farrell's character up the wall from the first scene to the last. By and large the music maintains a Belgian restraint, as though to further annoy Farrell's character, until the arrival of Ralph Fiennes. Then things start to boil and explode in gunfire, at which point electric guitar makes a surprising appearance as well.

But soon we are most all dead and the music settles back into its forlorn delicacy. 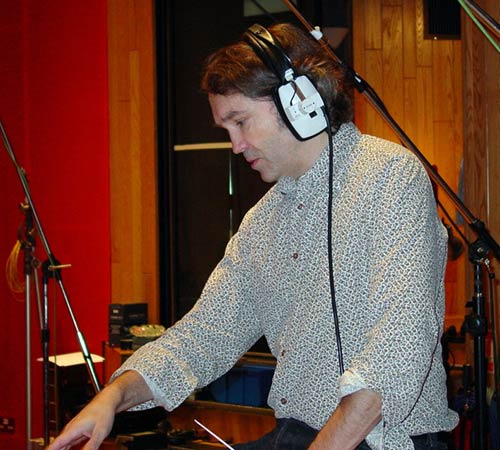 Carter at the podium
(photo by Mike Farrow) 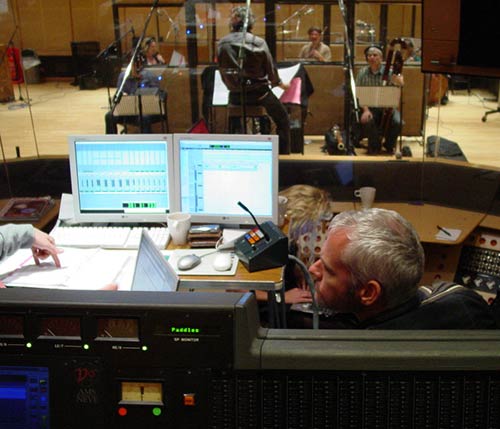 Martin McDonagh in the Control Room
(photo by Mike Farrow)

Lakeshore Records produced this interview with me to promote their release of the soundtrack to "In Bruges".

Brian McNelis was the executive producer of this video, David Huffman produced and directed it, and Matt Kohn shot it. 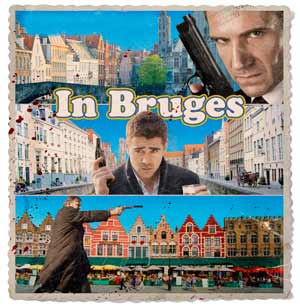 Written and Directed by Martin McDonagh
Produced by Graham Broadbent 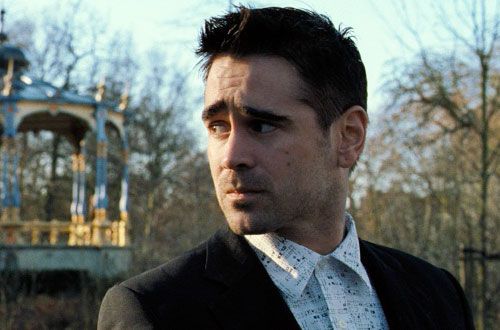 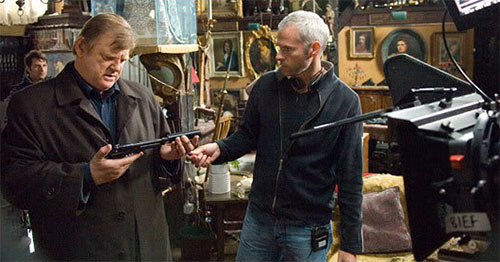 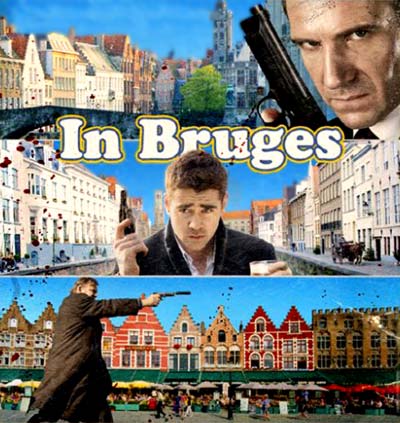 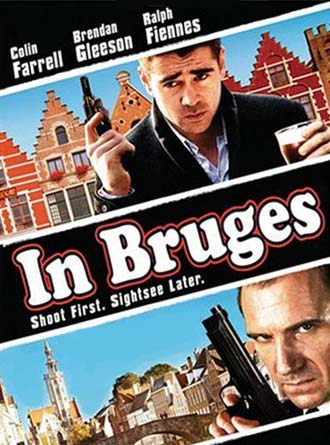 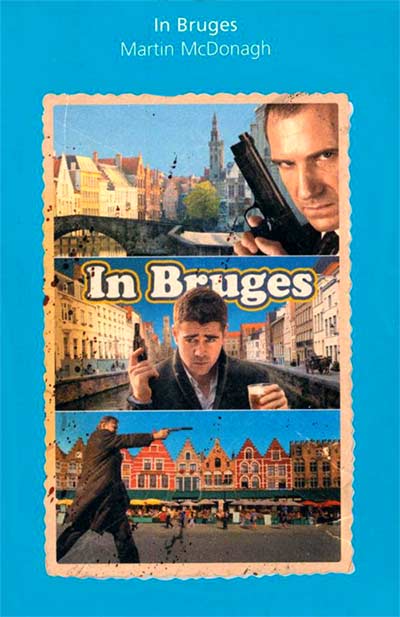 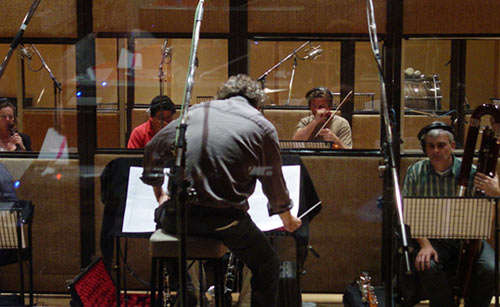 Carter's Back (photo by Mike Farrow)

An odd logistical wrinkle was the insistence by Focus Features, who were paying for the film, that they hear synth sketches of all the music before we record it. I'd never heard such a request before. In my previous experience it was the director who approved the score, not the studio.

Focus is the "boutique" division of Universal Studios, and they've made some claims in the past to protecting the filmmaker's vision, but in this case they apparently felt more protective of other things.

I was bemused but didn't object to sending my sketches to Focus. However they also required that we postpone the recording so there would be time for some number of their executives to hear the sketches and give the director their notes. Due to the postponement we ended up losing the large room we were going to record in and instead had to work in a much smaller studio and so the sound of our 11 orchestral players never really got to bloom as I'd hoped. (The players were wonderful, though.)

In the end Focus had only two notes that made it to me. One was that the opening cue be recorded as it had been originally written, dispensing with a darkening of tone that Martin had wanted. The other was that the last music in the picture, occuring after all the main characters are dead or dying, be more, shall we say, "optimistic". After due consideration Martin and I dismissed this as absurd.

Joel Coen has told me that, without exception, the "arty" ministudios like Focus are more intrusive in the filmmaking process than the major studios. (Focus is making the next two Coen Brothers films.) 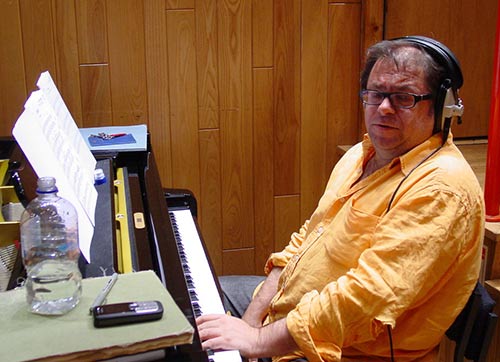 Dave Hartley at the Piano
(photo by Mike Farrow) 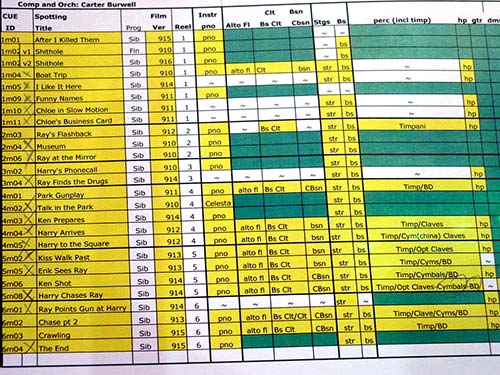 The score below is to the Prologue from In Bruges. Click here to download a PDF file of the score. 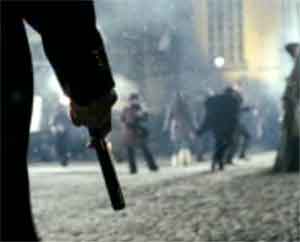 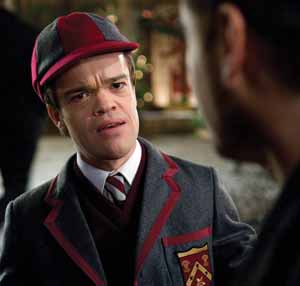 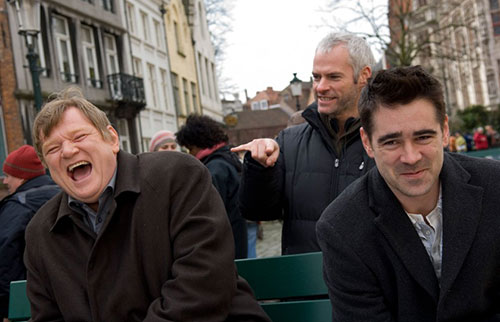 "It is easily one of the best debut feature films in recent memory... The film's score, by one of cinema's best and subtlest composers, Carter Burwell, is a perfect counterpoint to the action. Curveballs and surprises are artfully woven into the quirky scenarios, which include a few exciting chase sequences and some humorously odd exchanges that bring Quentin Tarantino to mind. But mostly, In Bruges is sharply written, superbly acted, funny and even occasionally touching." - Claudia Puig, USA Today, Feb. 8, 2008.

"...The best of 'In Bruges' tends to be the most overtly comic, such as a dwarf-clobbering, coke-snorting melee set in a cramped hotel room, or the mournfully understated musings of Ken as the pair take a canal boat tour. Carter Burwell, who works with the Coen brothers, contributes a sad and beautiful little musical score, teasing out the dread and loss in the killers' hurry-up-and-wait circumstance." - Michael Phillips, Chicago Tribune, Feb. 7, 2008.

"...With its gray canals, brown brick buildings and twinkling lights, there is indeed something magical about the city. But "In Bruges" is neither a world of fairy-tale gentility nor purely evil deeds. For McDonagh, it all coexists. And assisted by the glowing cinematography of Eigil Bryld and plaintive music of Carter Burwell, it's a life even bad guys find worth living." - James Greenberg, Hollywood Reporter, Jan 21, 2008.

"...'In Bruges' is a dead-of-winter miracle. Tribute must also be paid to the haunting music of composer Carter Burwell." - James Verniere, Boston Herald, Feb. 8, 2008.

"The darker aspects of the film were perfectly emphasized by the prolific composer Carter Burwell's score, whose credits include upwards of 70 films, including all of the Coen Brothers' films. The score provides McDonagh with the perfect means of transition between the dramatic and the comedic elements..." - Jef Burnham, Film Monthly, Feb. 13, 2008. 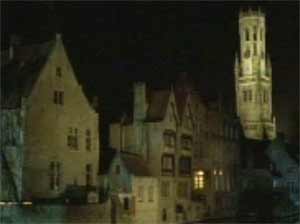